On Thursday Maggie asked if I would like a ride up to Fruit and Veg stall at the Rocky Mountain Nurseries about three miles from Wells.  We were going up to get oranges, lemons etc for a great marmalade making spree next week.  We are going to make marmalade to raise funds for the refurbishment of the Chapel at the Wells Almshouses.

It is almost like going to a wholesalers, as the owners buy the best in season, and sell off whole boxes of fruit and veg at very competitive prices.  We bought a whole box: (cardboard) of fine but 'ungraded' forced rhubarb for £5 to split...this is just half a box!  It was towards the end of the day so I think we arrived close to the final sell off. 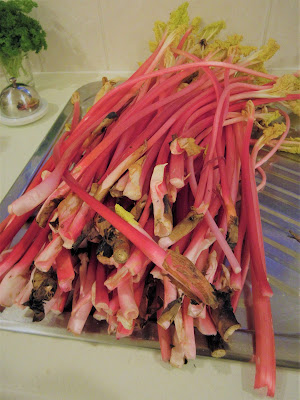 After washing and preparing the stems, I had 1.75Kg, but by then was too tired to start cooking... 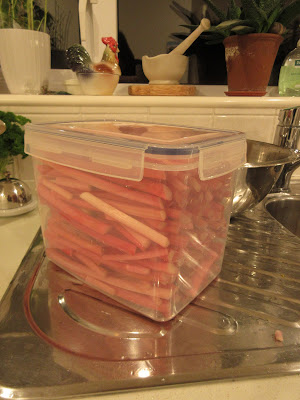 By yesterday evening I had looked through recipe books and had plans not only for the 1Kg of rhubard that went into the jam, but had also made a rhubarb crumble and an almond and spelt cake with chopped rhubarb in it.

For the jam, the rhubarb was chopped up, and layered with 900g granulated sugar to which I had added a sachet of powdered apple pectin, the juice and the rind of an orange... 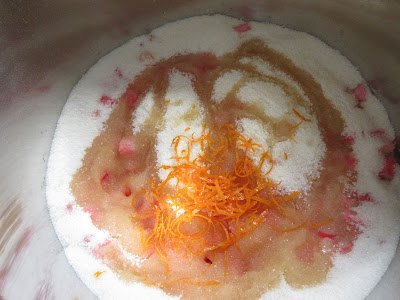 After several hours of trying to get back to sleep, and no results, I was up at 5 a.m this morning, and found that the sugar has pulled out a lot of the juice leaving the little pieces of rhubarb bobbing around near the surface.  So is this doubly early Rhubarb Jam? 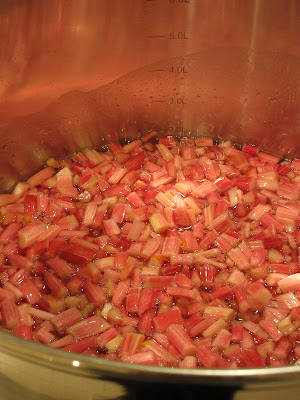 I boiled up the jam, using both the thermapen to test for the 105 c temp, and a cold plate for the wrinkle test, to check when it was ready to pot...and was very happy with this very delicate pink rhubarb jam. 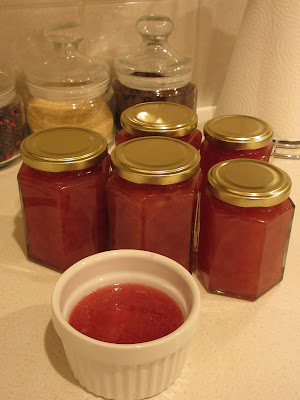 This is the first time I have bought the very early rhubarb, and wanted to make a very simple preserve.  Last year I made a double ginger rhubarb jam as well as a rhubarb, fig and orange jam from garden grown rhubarb. 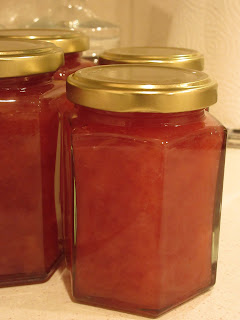 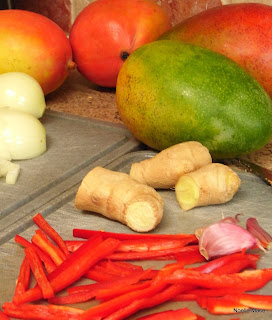